Yes, I know, some of you ship DJ x Da Vinci but they are siblings, for that I shipped DJ with Dawn. If you don't like the ship, I respect your opinion, but I would like to respect mine too.

One day, when Dolly and the other siblings woke up, they heard a noise. They saw that a new dog was moving into the adjacent apartment building. DJ went to see what was happening. Then, a beautiful Dalmatian came out of the house. She seemed happy with her new home. DJ wanted to go talk to her. When he went to say "hello", the dog blushed, and left. Then DJ went home, disappointed that he could not talk to her. When he entered the house, Dylan saw that DJ was sad, and asked him what had happened. Dj explained everything. Dylan promised to help him tomorrow. dj smiled at him, and went to sleep. The next day, they went to meet the new neighborhood dog. dj was still afraid that the dog would run away from him, but it would not hurt to try. After a while, they saw the dog again. dj went to talk to her, but calmer than last time. Well again, the dog did not pop it. dj told her everything about him, and she told him her name. They called her dawn. But D.J wanted her to meet the other Dalmatians too, so he invited her to his house. Dawn, was a bit worried: "what if they don't like me?" D.J told her to don't worry about that, and they came in: "I proudly introduce Dawn! My best friend!" D.J said. "So this is the girl you were talking about all day long." Doug said. After a while, they became close friends, and then, dj told her his feelings. Some years later, they have 4 puppies, 3 born, and 1 adoptive

Relationships with the Dalmatian family:

"He is a good friend of mine, but, he's a little annoying. But, because I don't like judging other Dalmatians, I will stop there, hehe."

"She's my best friend, along with D.J! I like seeing her skateboarding. I tried to do that too, but, I'm very bad at it!"

"Dawww, they are sooo cute!

"Dante, come on! The end of the world is NOT near!"

"They are a bit annoying sometimes, but I still like them. But they always want me to wear pink bows! Pink looks a bit silly on me."

"He's my best friend, and the first friend I had when I moved into the 101 Dalmatian street! He is so sweet, kind, and he plays cool music! I love this guy so much!"

"She is a really good artist! Very talented!"

"She might be the cutest Dalmatian I ever met!!! I love her!!"

"She's sometimes rude to me, but I don't really mind!

"Me and Hansel are every good friends! To be honest, I sometimes tease him for his crush on Dolly"

"Awww, she's so cute and fluffy!! (Dawn when she met Snowball)

"Hmm, I like her! We sometimes play at the park along with Dolly!"

"My best friend along with D.J and Dolly! She's very cool!

"I must admit. Some dogs dislike Pearl, but I actually like her. She just wants everything to be perfect!"

"James is my cousin, and I sometimes see him as my brother. Ok, I must admit: I sometimes get mad with him, when he plays loud music when I'm sleeping, but, I still love my cousin!"

"The worst! She is so rude, and selfish! Yeah, I know, judging other dogs is bad, but, Clarissa is so rude!

"She wanted to kill the Dalmatians! I mean, who could even trust her?!"

Hunter (she likes, and dislikes him)

"I can't tell if he is bad, or good, Cruella De Vil forced him to do it, but I still don't trust him"

Dawn is super duper shy, and very kind. She loves making new friends, and meeting new people. She is also a very loyal pup, who loves helping other animals, and people too. She cares for everyone, expect Clarissa, because she hates what Clarissa told about the Dalmatians. Dawn has got a crush on D.J, and she loves spending time with him. They love listening to music together! D.J taught Dawn playing the piano, so, she can play music with him

Her birthday is on January 6th.

Nicknames given to her by others

Her collar is yellow, and her pup tag is a sun.

"D.J is my best friend, and he will always be. I don't mind what others think for us, I don't think they know what true love means. I really enjoy hanging out with him! I sometimes go with him at concerts. We both love music! He also taught me playing the piano, and I really appreciate that! D.J was the first friend I had here, and I really love him. No matter how different we are."

"I see James as my brother sometimes, because we grew up together. He is my closest cousin, and I really enjoy playing with him. I must admit, it is annoying when he plays loud music when I'm sleeping, but I still love my cousin, and I will always. He's always by my side, and he always protects me when I'm in danger."

"I must admit, having three puppies to take care of is a hard job. Let's don't forget to mention we adopted Lynn too. But, who cares how hard it is? We love our puppies, and we will always love them. Ok, ok, I must tell that I'm sometimes a bit overprotective to them, but only because I want to protect them. Disco and Dancer usually spend time with their father, and I usually spend time with Lynn and Dusk."

Dawn is 3 years old (human years), so that means that she is 12 years old (dog years)

Some pictures of Dawn! I drew some of them, but other pictures are made by other artists!

NOTE: I know in the edits Dawn looks like Dolly, because I used to edit Dolly's body to make Dawn, but I don't do that anymore!

I was bored. So I drew this 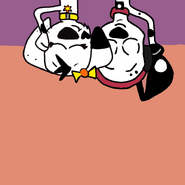 Am I doing it Right? Dawn tried the hand gesture that Dj does, and she done it wrong

Awwww!!!!! Thank you so much eveedude for making this!

YCH from DragonCityBro on deviant art! She did such a good job thank you!

I named this "the best art of me". Dj drew Dawn, as a gift for her!

Dawn new ref sheet! Base by MizanLinearts on deviantart

"I choose you!" A screenshot edit I made!

Ask my ocs on DA!

This is how D.J sees Dawn! Edit by me

Request by Alphathestorypup! Thank you so much, I love it!!

Dawn drawn by my brother! Thanks!

This is how Dawn looked like when she was a puppy! Base by 103DalmatianBlvd on deviant art!

Dawn page. The faces with the brown lineart are Dawn's old designs, and the other ones are her face expressions

I finally finished this! Base by 103DalmatianBlvd. 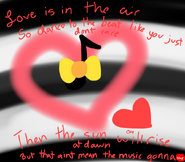 Art trade with Strawburry doggo!! Thanks! 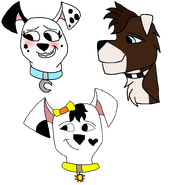 An amazing gift by AlariTheRouge!! She drew Dawn, along with Danielle (MiaThePup's oc)

Commission by FigmentPAWS! Thank you so much!

Commission from AlariTheRouge!!! Thank you so much!!

Art trade with SuperBFDIRory!!! Thank you!!! 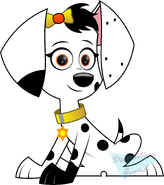 Art trade with the amazing DalmatianGuard on DA!!! Thank you I love it so much!!!! 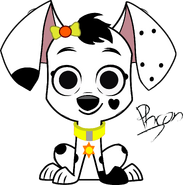 Here's how Dawn looked like, when she was younger! Base by PhrontisteryArt

Commission by the amazing JustsomeKittyKat!! Thanks!

Request from LanoHagu!! Dawn in the bluey style 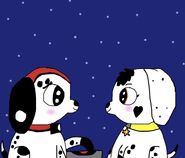 A beautiful drawing by AdorableDestiny! I love this so much thank you!

This is how Dawn looked like when she was younger. Base by 103DalmatianBlvd 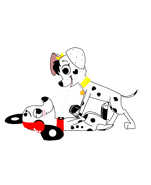 Commission by the amazing cutepuppies! I love this piece so much! Thank you! 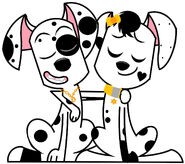 A beautiful gift by Fluttershy4Love! Dawn and their oc, Daymon sharing a hug! Thanks!

Dawn and Dots, drawn by DoggyColette2009! Thanks!
Community content is available under CC-BY-SA unless otherwise noted.
Advertisement